The world’s oldest democracy, a major financial centre and perpetual armed neutrality – is that the reality of Switzerland, or just a series of clichés? This exhibition sets out to explore those myths and measure them against the everyday lives of the Swiss population, from the 18th century to the present day.

Each room examines a theme that is central to understanding Switzerland, then and now: identity, territory, family and the role of women, but also work and democracy.

Aimed in particular at the younger generations, this new exhibition makes their voices heard and interweaves them with the testimony of those who have helped to build Switzerland’s prosperity since the late 19th century. By way of conclusion, a young audience investigates a myth that is still alive and well today: Switzerland as a “happy” country!

Activities for the public

Come and spend some time with us, we propose a large selection of activities for different target groups.  A motivated and experienced team is awaiting you.

Guided tours can also be arranged outside of the official opening hours upon request. 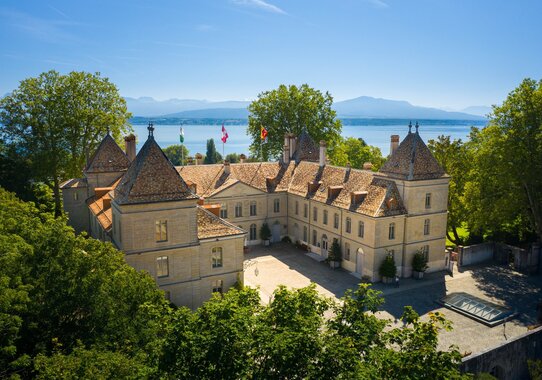 At 14:00 on 18 June, the Château de Prangins – Swiss National Museum opens the doors of its new permanent exhibition What is Switzerland? It sets out to explore the founding myths and clichés of Switzerland, and measure them against the everyday lives of its population from the 18th century to the present day. The young generations also have their say, linking the past to the future of a country of many more contrasts than one might suppose. The vernissage, which is open to the public, will take place in the presence of Vincent Kucholl and Vincent Veillon, as well as pupil-guides from schools in Vaud who took part in the project.

What is Switzerland? looks at a country that is often regarded as the world’s oldest democracy, but is also a major financial centre known for its armed neutrality. The exhibition adopts a thematic approach, exploring subjects such as identity, territory and the mountains, the family and the role of women, consumption and the food industry, work, democracy and neutrality. The picture that emerges is of a Switzerland whose history is rather less consensual and linear than clichés might suggest. With revolutions, strikes, youth revolts, feminist and environmental struggles, it has experienced many periods of tension and division that reveal key societal and political issues at work. Visitors are encouraged to challenge their own views of the country, its representations and its symbols.

The richness of Switzerland’s heritage is displayed through some 300 precious, unusual or everyday objects including an ingot mould, a piece of stone from the Gotthard and a time clock. Historical documents, audio testimonies, previously unseen photos and TV archives offer an account of social and cultural practices, as well as various aspects of political, economic and institutional history. What is Switzerland? is also a multi-sensory experience. While offering plenty to look at and listen to, it also engages the senses of smell and touch with, for example, unusual perfumes and a mixing desk of “typically Swiss” sounds.

The exhibition is aimed at both Swiss visitors interested in seeing another side of their country, and anyone living in Switzerland who wants to learn more about their host nation. Also designed for schools, What is Switzerland? has been created in close cooperation with a committee of teachers and school heads as an educational resource for teachers of history as well as other disciplines including geography, civics, languages and art. To promote inclusivity, the new tour additionally offers texts in simple language.

Please note that the downloading and use of images is reserved exclusively for journalists, teachers and other authorised parties. Images are only permitted to be used for the purposes of reporting on exhibitions, provided the captions and reference to copyright are included, or for teaching purposes. Many thanks!

Everyone who contributed to the project and all the lenders: